RSB AutoGroup, BASF’s R-M® premium paint distributor in South Africa, was recently awarded the EMEA Distributor Excellence award. The accolade was in honour of RSB’s achievement in becoming the largest distributor of the R-M® paint brand in BASF’s EMEA (Europe Middle East and Africa) region for 2015.

Dr. Katja Scharpwinkel, senior-vice president for BASF Coatings Automotive Refinish Solution EMEA who presented the award together with René Lang, vice president BASF Coatings Automotive Refinish Solution Sales Management EMEA said, “RSB is an extremely well managed distributor which puts a strong focus on their customers, making the R-M® brand a good fit in what they value. RSB also has an incredible growth story were many distributors have not been able to achieve what they have achieved over the last few years.”

RSB has been distributing R-M® in South Africa since 2010 and has grown the brand within the country with branches now found in Johannesburg, Cape Town, Durban and Bloemfontein. 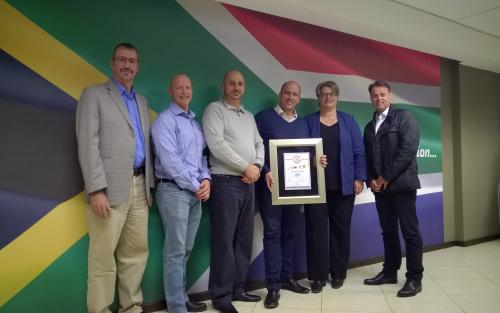