The new livery is marked by the painting of the front bumper in “Azzurro Lapo” (azzurro is the Italian word for light blue) - a particular tonality developed by R-M for Lapo Elkann, part of R-M THE CODE project.
It carries over the whole length of the car, with a racing-inspiredstrip that covers the hood, the top and the trunk; and it is precisely the two-tone contrast - between the two tonalities of blue - the leitmotif of this one-off, which can be noticed in the customization of the lateral gills and in the wheels too, fitting Pirelli tyres and painted in blue with the spokes finishing and the interior rim in “Azzurro Lapo”, as well as the strong brake calipers from Brembo braking system, branded with the Milanese atelier’s logo.

“Blue and light blue are ethereal colors associated to the sea and to the sky, such symbols of the infinite. And that’s exactly beyond this border that we would like to go with Garage Italia, with a visionary approach that would like to draw inspiration from Agostino Bonalumi and Paolo Scheggi’s ones, whose works are displayed inside the space in Piazzale Accursio. It is well known that blue and light blue - as well as being my colors - are also those belonging to “my Italy”, that I wanted on this Ferrari, among the best known symbols of the tricolor in the world. With this model, we gathered - once again - the fashion world, art, design and the car industry together.”
Lapo Elkann, Founder and Creative Director of Garage Italia 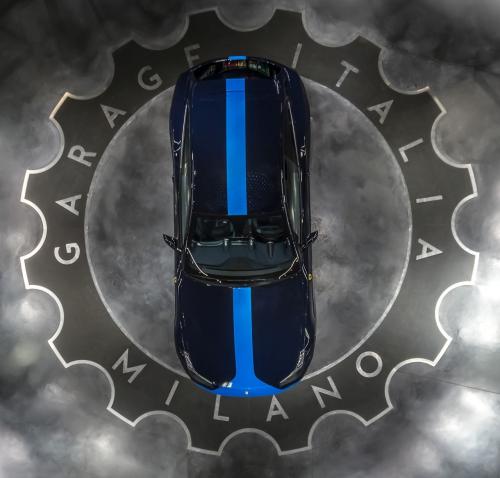 SITE MAP | Credits | Legal note | R-M Premium Partners | BASF Coatings GmbH | BASF Global | ©2020
By continuing to browse the website you are agreeing to our use of cookies to propose you the most relevant services and offers. For more details, review our cookies policy.
Click here and agree