So close! After 15 action-packed and gruelling days racing, over 8,000 kilometres of some of the world’s toughest roads - from Peru’s capital Lima, through Argentina all the way to the Chilean capital, Santiago - last year’s winners, Petronas Team De Rooy IVECO and technical sponsor R-M, celebrated a very commendable fourth place at the 2013 Dakar Rally.

This year’s rally was particularly tough, with two of the five strong Petronas Team De Rooy trucks being forced to retire, when Jo Adua’s truck suffered extensive damage and Hans Stacey launched his truck off a sand dune and landed upside down, not only requiring major repairs, but losing tools and spares essential for him to be able to finish.

Despite these setbacks, on the final stage of the Rally, it was plainly evident that Gerard De Rooy was going to go down fighting with just seconds separating the leaders and he drove the wheels off his R-M GRAPHITE HD Petronas Green IVECO Powerstar to finish second and fourth overall in the final ratings, just five minutes away from a second year on the podium.

This is the second highly successful year that the dynamic partnership of IVECO trucks, Petronas Team De Rooy and technical sponsor, R-M Automotive Refinish has proved once again to be the team that’s hard to beat! 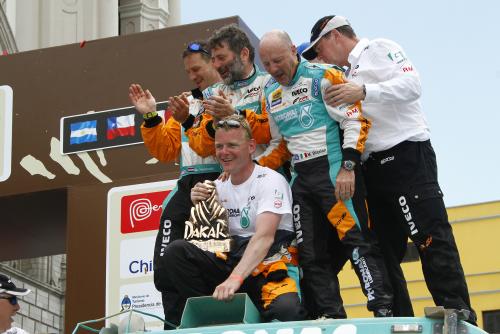 SITE MAP | Credits | Legal note | R-M Premium Partners | R-M in touch | BASF Coatings GmbH | BASF Global | ©2019
By continuing to browse the website you are agreeing to our use of cookies to propose you the most relevant services and offers. For more details, review our cookies policy.
Click here and agree